The Chilean Air Force has been characterized by flying a wide range of fighters since its inception, where some have excelled for their reliability and great love for their pilots. And if we talk about those iconic planes, we must if or if to mention one that after 40 years still continues to serve in its ranks, The Northrop F-5E Tiger III.

Being welcomed in the 1970s, the Northrop F-5E Tiger II quickly became the backbone of the FACH, making a qualitative leap for their great agility, speed and air-to-air combat capacity.

The Northrop F-5E Tiger, had to overcome various problems due to the amendments made by the US in the 80s, being on the verge of being decommissioned due to lack of spare parts, which motivated the FACH to find ways to enhance and revive the Tiger by converting it with the help of the IAI (Israel Aircraft Industries) in the modern and new Northrop F-5E Tiger III.

Currently the Northrop F-5E Tiger III is the most modern F-5 in service, with a shooting system guided by the pilot’s helmet, state-of-the-art radar and navigation system, the possibility of carrying “all aspect” missiles and medium range, making it a platform that after 40 years is still capable of providing correct service and meeting the challenges of the 21st century FACH.

And to pay tribute to this beloved aircraft operated by the FACH and many other nations, we will use the 1/72 Hobbyboss kit to make a representation of the Northrop F-5E Tiger III during its service in the Chilean Air Force Group 7. 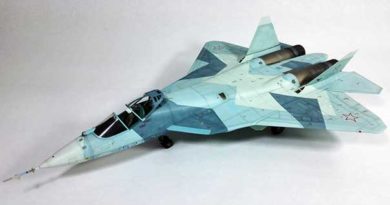