Chance Vought F4U 1A Corsair is a carrier-based fighter type, primarily in service during World War II and the Korean War. Demand for this aircraft quickly outstripped Vought’s production capacity, which is why it was also produced by Goodyear and Brewster; the designation for Goodyear’s Corsair was FG and F3A for Brewster’s. From the delivery of the first prototype to the US Navy in 1940 and the last delivery to France in 1953. Vought produced 12,571 F4U Corsair aircraft, representing 1 of 16 different models. This is, for the time, the largest production aircraft in US history. It is also the most powerful internal combustion radial-engined fighter at the time, a Pratt & Whitney R-2800 Double Wasp. with 2,000 hp, 18 cylinders.

The Corsair served in the United States Navy, United States Marine Corps, Royal Navy Fleet Air Arm, Royal New Zealand Royal Air Force, French Armée Nationale Aéronavale and other smaller air forces until the 1960s. From April 1944, the US Navy in the Pacific used it on its aircraft carriers (previously only used from land bases) and it quickly became the most powerful naval fighter of World War II along with the Grumman F6F Hellcat. Some Japanese pilots considered the Corsair the most powerful US fighter in that war. With the US Navy, the F4U Corsair defeated Japanese pilots with a record 2140 aircraft shot down compared to only 189 aircraft lost, achieving a win ratio of 11 to 1.

At first, it was suggested that the unit use the nickname Boyington Bastards Squadron, but they refused because Supreme Command would not approve of the name, so it was renamed Black Sheep Squadron. The personnel of VMF-214 lacked combat experience, but under Boyington’s command and experience in China, and his powerful Chance Vought F-4U1A Corsairs became one of the best squadrons in the Pacific. The Black Sheep achieved an incredible 97 air combat victories, not to mention the sinking of countless troop transports. -Ground bombing of enemy installations, etc.

On 3 January 1944, Boynton scored his last victory, the 28th shot down. On the same day he was shot down by enemy fighters during the battle over Rabaul, seriously wounded. But, still alive, he drifted for several hours in St. George’s Strait in the Bismarck Islands. At first it was thought that he had disappeared during the operation. But in fact he was rescued by a Japanese submarine and became a prisoner of war. This sub took Major Boyington to a Japanese base at Rabaul, where he was brutally interrogated. He was subsequently imprisoned in Ofuna Prison in Yokohama, Japan. He was eventually transferred to Omori Prison near Tokyo until 1945 when hostilities ceased.

Shortly after returning to the United States, as a lieutenant colonel, he was ordered to Washington, DC, to receive the Congressional Medal of Honor from the President. This was awarded by the late Franklin D. Roosevelt in March 1944. On 4 October 1945, Boynton also received the Commandant’s Navy Cross from the Commandant of the Marine Corps for his attack on Rabaul. This model represents one of the “Black Sheep” Chance Vought F4U1A Corsairs. It is driven by Greg “Pappy” Boyington himself.

Click the image below to see the full article 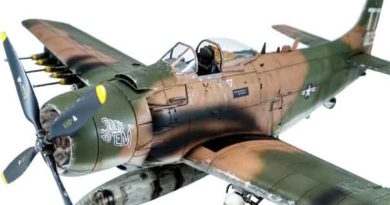